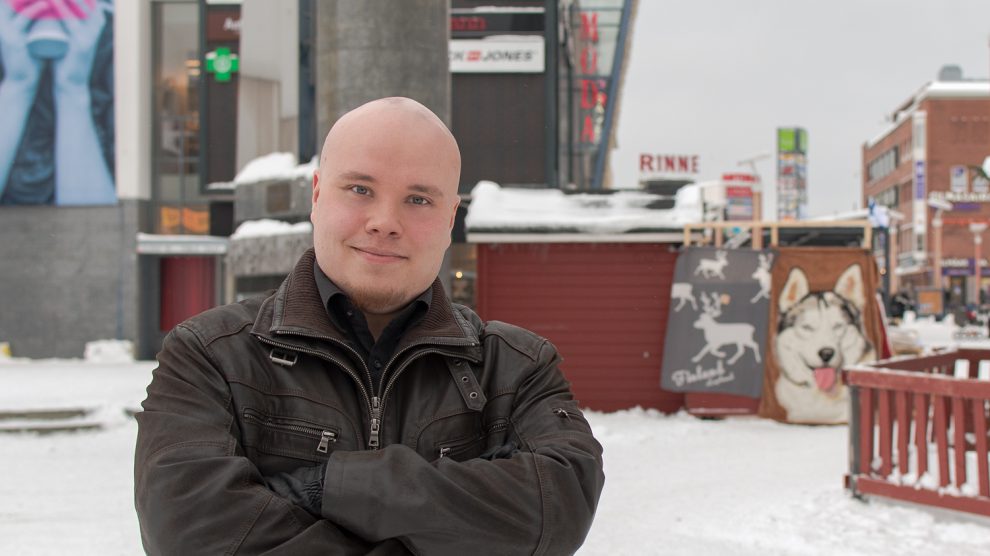 My name is Tuukka Kuru and today Im representing Finland, your big brother from the north. I describe myself as an ethno-nationalist. It means that the concept of nation reflects my political views on every layer. Nation, or natio as in Latin, means certain race of people who are bound together by the common ancestry, heritage, language, tradition, unique inborn features and shared history.

As a nationalist, I believe that no-one is truly individual. Like a rootless atom without any connection to another people around them, or with older generations. As you know, many liberals at least want to believe that kind of nonsense. For them, we are just individuals with individual needs and individual goals. For them, luxury and cheap pleasure resembles the ultimate perfection as a society fulfilled with sex robots, video games, virtual pornography and all those synthetic products, which are going to replace our natural way of life. No more pain, no more agony, no more duties, no more constraints and no more ancient myths or rituals. Just comfort, till we all die.

But as you all know, that is not going to be our future. All the vices, all the pleasures, the luxuries, consumption-oriented lifestyle and money are not just illusions. They all resemble mortal danger to our existence as a nation. First, that kind of thinking corrupts our judgement. If we accept this individualist idea that there are not any ways for separating “us” from “them”, we can’t see the difference between the friend and foe. Without social cohesion the whole population will be defenseless against conqueror, who isn’t playing by the same “democratic” rules as we are doing. The system of apathy, tolerance and infantilism I mentioned earlier will end and it will be replaced by more dynamic, although non-European, order. Any society, which neglects the laws of Nature will collapse and finally disappear.

Some of you might be wondering, what are those laws of nature? First of them is the law of racial cohesion. Population without social and ethnic cohesion can’t make the difference between us and them, and they will be eventually conquered by the group with better cohesion. Second law is the concept of territory, which means that every population should defend the land that belongs to them. Population, which grants foreign people to stay in their land, will be eventually replaced by outsiders. Third law is the law of leadership. Population cannot survive without intelligent and brave leaders, who are ready to defend their kind, even against the most horrible odds. Fourth law is the law of hierarchy. Hierarchy means that the most qualified members of the group should rule over the weaker ones. Everyone has its own place in the tribe based on their skills and motivation. Fifth law is the law of motherhood. Motherhood means that being a mother is normal and desirable way of living. Population with low fertility rate is unable to sustain itself over longer period and will be eventually replaced by the outsiders.

These laws are universal, and they apply to every population, regardless of their religion, race, culture or ethnicity. As you understood already, these laws of nature don’t care about your computer, tablets, new cars or academic diploma. Even the most sophisticated, the most just and the most civilized society will collapse, when its members lose their identity and will to fight.  As you know already, today’s conquerors aren’t the most powerful and most intelligent ones, on the contrary.

Those non-European masses, the new conquerors, who are now entering Europe in millions, do not carry guns. They are not backed by marvelous air force or the fiercest armored units. They are practically sea of beggars, the pinnacle of human surplus that is being produced in developing countries by millions. As we all know, those countries are not the real threat to us. We, the western nations, could easily occupy every one of them in a couple of weeks if we would like to.

No, my friends. The greatest threat is not the current refugee wave. It isn’t just the growing non-White population inside the Europe. Its not Islam, or any individual jihadist group. It is our current state of mind. The way how we, the white Europeans, think. That naive illusion that I portrayed earlier. We are practically HIV patient without defensive system even against the puniest flu. Its not important to argue about precise numbers of the newcomers. Its more important to discuss about who we are, and what we are trying to preserve. Those non-Europeans crossing our borders are not the disease, they are just a symptom of our own cowardice. With correct state of mind, we could easily stop those people without hesitation and send them all back to their own countries. We have that muscle already. But for now, we are still weak. Like a giant without the fighting spirit. And the spirit, my dear friends, is the one we are going to find together.

As nationalists, we should never be satisfied with small victories. Those moderate anti-immigration parties, which can be found in every European state, are not the long-term solution for our survival. Most of the time those parties try to soften their public image to ensure larger popular support. And by doing that, they usually unconsciously adopt liberal narrative in their public rhetoric.

At first, they might be a solid “anti-immigrant” movement with some racialist and anti-Semitic views included. They are the “bad guys”, but they don’t care about labels, because they think the end justifies the means. When the party is trying to represent itself as a more serious and moderate choice, they usually adopt some mainstream liberal viewpoints. Earlier racialist opinions will be replaced by cultural ones, and earlier anti-immigration standpoint transforms to “anti-Islamism”.  Anti-Islam usually means pro-liberal, because homosexuals and other minorities are often the first victims of Islamic immigration. At this point the party isn’t anti-immigration anymore, and they start accepting all immigrants if they just “share the common European values”. After the country has turned into a racial mosaic of thousands of different tribes and religions, the party will change its stance to “anti-extremism”. At this point, your country is basically Lebanon, and you have already lost the game.

The goal of all nationalist activism should therefore be securing your nations existence. Plain and simple. You should never make compromises on this core value, not even against the overwhelming odds. I know that there are many people in the audience who are coming from truly multicultural and rootles Western societies. You may be asking, how can we do it? Is it bit too late already? How about some easier secondary objective? But just think a little bit. If you accept the idea of non-European presence in your country, your land, your territory, will turn non-European in mere decades. No-one is going to fix your precious country for you. You must do it yourself.

Germany is tragic example of current demographic crisis. Nearly 25 % of the population has nowadays an immigrant background. Among six-year-olds 38 % are born in non-German families, and in many larger cities that number has been over 50 % for years. If you accept this population change, and merely criticize the inevitable side effects, you have already admitted the defeat. Rainbow flag and German passport are not magically turning those pseudodeutchers to Germans as America didn’t turn Europeans to Indians nor did South Africa turn Boers to Bantus. Every civilization and culture depend on its own people and their unique attributes. “Culture” is just reflection those attributes. When someone says, “the Europe has changed”, they literally mean that the population has changed. Hopefully not permanently.

In Finland, I have discussed with many party members who shares the same concerns about the future as I do. However, there is one huge difference between us, which I have named as labelophobia, the fear of labels. They might say, for example, that we should oppose immigration, but not because the immigrants are non-Finnish or because their behavior is primitive, but because immigration is “bad for the economy”. They threaten our liberal western values etc. But, if at any point, someone from the left defames them as racist, they will go totally nuts. Their hands start shaking and they start muttering “n-n-no i-i-im not r-r-racists” and other puny excuses to deny their sins.

Some of them are sneakier. They might be “racists” behind the closed doors, just waiting for the “right moment” to strike. Usually that “right moment” needs over 50 percent popular support in parliament, full media control and cultural hegemony, which are of course impossible requirements without almost complete loss of social order, hyperinflation and left-wing uprisings. Let’s think about this strategy a bit more. Let’s imagine a situation that your country is receiving hundreds of thousands of people every year who have good reputation. Low criminal activity, good academic scores and in many ways, they perform better than the majority population. How could you deny their arrival with liberal arguments? What if this model minority is largely overrepresented on human rights issues and claims that your country has always been multicultural as it de facto now is, and demands even more immigration? What if majority of those new immigrants do not share any good characteristics with the earlier group? What is the turning point in this scenario, when that secretly anti-immigration party finally gets over 50 percent of popular support? Im sorry guys, but solely voting for Alternative für Deutchland, Fronte Nationale or Svergie Democrats will not save your country.

The only way to take our countries back starts inside our own mind. We can’t secure our existence as independent nations, if we can’t point out the real threat and recognize what makes us what we truly are. My racial identity is white, my bloodline is Finnish. I didn’t choose either those identities, nor did I receive them as a gift from my government. I was born with them and they are the ones that makes me the person I truly am. Not the constitution, not my country’s democratic system, but my blood, and I know it’s the same for all of you.

I wish you a safer, and more European future.